I have had a number of people asking about this error and with a quick stop over at the microsoft knowlege base I find the answer, although the solution appears to have you move to Outlook.
This is probably a good thing since the outlook express mail is the oldest part of the windows (pre-xp) days and the security just not quite as good as outlook, especially within office 2007 as the security issues have become greatly reduced.
Posted by Mike at 11:48 pm

Carbonite pop up stating you have exceeded your storage limit-the fix included! 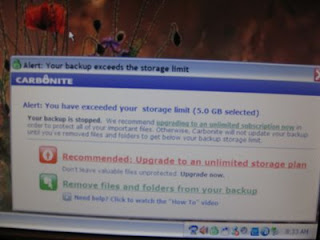 I recently had a client mention a pop up from Carbonite stating she needed to upgrade because of exceeding the storage size. I had explained to her that this could not be true since Carbonite will backup an unlimited amount of storage (based on it being an internal hard drive and not some usb-based storage), and even figured it might be some malware attempting to thwart you in to installing or buying something you do not need. Since I could then connect to her computer and check on things, this message did not reappear, until this morning when she was good enough to take a picture of it. No, this is not a screenshot but an actual picture from her camera.
A quick email to the Carbonite tech support and I am happy to report they were aware of it and have a quick and easy solution as stated in the email:
Thanks for reaching out. This was an “oops” on our part; she was upgraded to 3.7 before it was ready for public release. A handful of our customers got 3.7 as an automatic upgrade before they should have, and the error message she’s getting is due to a problem with the build of 3.7 she received. The link below will correct her problem; she’ll still be on 3.7, but it’s an updated build that corrects that problem. If you have other clients who also receive that message, feel free to share the link with them as well. I’m sorry for the inconvenience.
Here’s the link: http://www.carbonite.com/download/CarboniteUpgrade-en.exe
Sincerely,
Len Pallazola,
Manager - Customer Service Systems Carbonite, Inc
Visit our blog at: http://www.blogger.com/www.carbonite.com/blog
Once again I am impressed on how great a product they have, client and tech support included!
If you are an existing client of mine and simply not sure what to do, just let me know and I can connect and fix this problem ASAP!
Posted by Mike at 12:28 pm

Although I believe the end product is somehow created from the RIAA (just a guess?  after you watch you can be the judge), but regardless, it should open some eyes to some pretty amazing statistics about technology and the world today.


Thanks to a client of mine for directing me to this presentation.

Imagine my own surprise when I install a new mouse on a vista machine only to find myself frustrated with the drivers and do a quick search through my own notes and find a blog post that I had started to work on, most likely wanting to vent in frustrations, therefore deciding I would RANT about it.  Although it was initially drafted over 1 year ago, amazingly it still applies today!
Drafted initially on April 20, 2007
I guess as a potential computer tip for helping with the optimizing of your computer, since I am a firm believer in using programs like CCleaner, Spyware Blaster, Spybot Search & Destroy, AVG Antispyware and Ad-Aware as my current aresenal (which you can download from the SOFTWARE/SUPPORT area) in the combat against the problematic 'stuff' that gets in your computer basically slowing your system down and in many cases, annoying you with pop up windows that you could do without. As I have and continue to provide updated and ever changing approaches to the cleaning and removal of the 'spyware'....

I have also discovered what I would consider a bug in which I am currently researching either a repair patch or .. whatever, must be done to fix a problem when you open 'computer'

I just learned that installing the latest Microsoft laser mouse software does help when using Vista (or maybe for XP as well, but my laptop is running on Vista 32 bit Premium) and the default setting for the middle mouse/scroll wheel is "instant viewer" and I was blown away by what it did, much like the 'switch screens' quick launch icon, it gives a pretty trick display of switching between (or just leaving it) in that mode, as I often am multitasking between computer screens using remote connection it is a wonderful way to make my one screen in to many. The key to this is having true real-time display in each window.

Since I know those computers that use logitech hardware, will have many items in which I would typically disable, such as the Logitech Desktop Messenger, which is nothing more then what I already block, the windows messenger. This doesn't mean you can't use Windows Live Messenger at all, this just closes the availability of this port to any other bot that might attempt to open it, as I believe this is why it is an option in such programs as X-Setup, that have a registry hack for this, as do other programs like Autoruns . I also use a Logitech Bluetooth keyboard.

This being said, it is not uncommon to find yourself looking at the 22" LCD Monitors when initially shopping for the 19" as well, in wide-screen edition, and when you double it, providing you with gives you two monitors to do your multi-tasking at a grand scale since you have 44" of desktop space) , is rapidly becoming the 'default' desktop system for the avid computer user as LCD Monitor prices are rather impressive as the margins between the two grow slim.

A little known program tweak called send to any folder was a very useful tweak you could make for windows, even before xp (I believe) since it was part of the power tools you could get through such places like Tucows  that I mention also and have a link for in the SOFTWARE/SUPPORT page . I normally use the move to and copy to within windows xp but with Vista, that disappeared and so I figured I would make a tip on it, but then found thatTech Republic already did a bang up job of explaining just how to expose this hidden talent within the Vista O/S.

This is one more little reason I say people shouldn't be so judgmental of the Vista operating system, comparing it to XP the way they do, since technically (I have already mentioned how the amount) of security issue-related malware attacks that I have seen would be close to half the amount within a computer running Vista.
Posted by Mike at 6:44 pm

Fake Microsoft Updates on the wild

I have known about this for some time, that is, the fake updates from hackers, taking advantage of Microsoft's Automatic Update feature and have pretty made a point of turning this off on any machine I work on. Thing is, I used to set it to 'critical only' but that still causes the computer to allow the port to be active.  You can learn more about this here from this ZDNet post.
Posted by Mike at 1:31 pm

The fact that within windows, you can choose to 'hide icons' on the system tray is a little disturbing, especially when they are there to let you know a program is running.  This doesn't mean all icons on the system tray really need to be there on start up, but this gets in to my OPTIMIZING TIP and that was not the point for this post.
I would have to say 9 out of 10 computers that I am in contact with will routinely have icons on the system tray (programs running in the background) that do not need to be there, but then there are others, like the Windows Update or Antivirus warnings (out of date, security issues) that are there to actually warn you of 'imminent danger' if you do not pay attention to them. This can be anything from performing a re-start of the computer, to having your antivirus not functioning by the simple fact it was not updated.  If you aren't sure what those icons are for, try hovering your mouse pointer over each one and it will typically provide a brief pop up display of what it is, and try RIGHT CLICKING on it as this will usually bring up some menu option to access the settings of the program.  You don't have to be computer literate at all to follow some simple steps which are nothing more then paying attention to all things happening on your screen, particularly the system tray!
Posted by Mike at 12:21 am

If you would like to have Google as your default search within your Vista operating system, here is what you need to do:

To search Google from your Start Menu: